Development to add hotel, new offices to 62 acres in Chandler 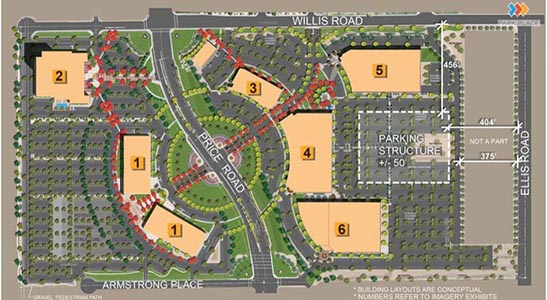 Developer Douglas Allred said he can’t wait to get started on Park Place II, a massive expansion of Park Place I that will bring 928,000 square feet of new office space and a hotel/conference center to a 62-acre campus near Price and Willis roads in Chandler.

“We are ecstatic to get started on Park Place II,” he said. “Over the last several years, Price Road has transformed into one of the most vibrant business corridors in the entire Valley. Park Place II will help ensure the area’s success for years to come.”

The Chandler City Council greenlighted Allred’s rezoning request July 28. The property had been zoned for agriculture.

Allred’s Park Place I, southeast of the San Tan Freeway and Price Road, has six fully leased office buildings with 2,400 employees and hosts such notable companies as Infusionsoft and Healthways.

Once completed, Park Place II’s total annual economic impact is estimated at $1.4 billion, according to a report from Scottsdale-based Elliott D. Pollack & Company. The City of Chandler will derive most of the benefit, but the East Valley as a whole will also share in the increased economic activity.

The new project will create more than 2,000 construction jobs and employ an estimated 9,691 when built.