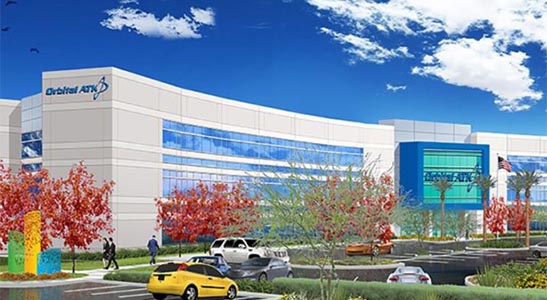 Last year, Orbital ATK hired 250 employees in Chandler and the company is working to fill 200 open positions and expand its Chandler footprint by another 50 employees in the next year and a half.

Orbital ATK announced that it will expand its launch vehicles division in Nov. 2016, and these new Arizona jobs are part of that expansion.

The company has a growing footprint in the southeast Valley and it’s been growing since the 1980s.

Orbital ATK has operations for all three of its business groups in Arizona. Orbital ATK’s launch systems group is in Chandler with 1,500 employees and plans to hire 200 more, said Trina Patterson, director of communications for the Launch Vehicles Division at Orbital ATK.

Those employees will be located at this upcoming facility upon its completion, Patterson said.

Orbital ATK has elements of its defense group located in Mesa and its space systems group also has facilities in Gilbert that work on projects like the Iridium NEXT satellite network.

The Chandler facility will work on rockets that will help protect the nation and deliver payloads to the International Space Station, Patterson said.

In the launch systems group, “everybody will be under one roof and it will help bring our consistencies and synergies together and be more cost-effect for (Orbital ATK) in the future,” Patterson said.

Ultimately, there will be 2,000 employees working at Orbital ATK. These jobs are high-wage engineering and manufacturing positions. Orbital ATK’s payroll in Arizona totals around $170 million in salaries, Patterson said.

The facility is being developed on the southeast corner of Price and Willis roads in Chandler.

The Douglas Allred Company is developing this project with Willmeng Construction serving as the general contractor. Balmer Architectural Group is the architect of the upcoming facility and CBRE is the brokerage firm.

Construction is scheduled for completion in 2019 and the facilities will be the latest addition by Douglas Allred Company’s Park Place, a 180-acre masterplanned office/flex space development.

The masterplan is located near the Loop 101 and Loop 202 interchange.

“Orbital ATK will have about 2,000 employees here, the overall impact we think Park Place will have is about 9,000 total employees here,” said Dave Allred, president of Douglas Allred Company. “The financial impact to the community over the course of the years will be in the billions.”