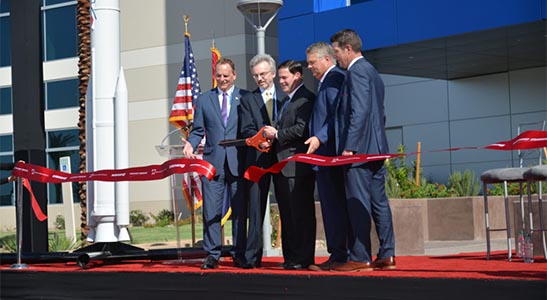 Fast, but fabulous would be a fitting way to describe the development process and the finished product that is Northrop Grumman’s new 633,000-square-foot build-to-suit campus that sits in the Park Place Business Park in Chandler.

On Tuesday, the general contractor on that project, Willmeng Construction Inc., hosted a ribbon-cutting ceremony, complete with skydivers, video highlights, Arizona Gov. Doug Ducey and other civic and business leaders from Chandler and the Phoenix market.

“Today, our economy is roaring, it’s among the fastest-growing in the nation,” said Gov. Ducey during his remarks. “People are flocking here in unparalleled numbers to pursue their version of the American dream. As a state, we’ve added over 300,000 new jobs since 2015. Thanks to leadership organizations like Northrop Grumman, Arizona continues to build on its reputation as a premier destination for the world’s most innovative companies.”

Northrop Grumman, a leading global security company, currently has 2,500 employees at its Chandler campus and more than 3,500 employees across Arizona with more than $30 million in payroll and benefits.

“I want to thank Blake Larson and the team here gathered at Northrop Grumman for their continued investment and confidence in the state of Arizona,” Ducey said. “You all have done great things here in Chandler and our state is committed to maintaining this environment where you can thrive, and so can your employees.”

The campus will serve as the home for Northrop Grumman’s launch vehicles business, which is led by Larson, the corporate vice president and president of Northrop Grumman Innovation Systems Sector. This office and manufacturing facility which supports national defense and aerospace, was developed by the Douglas Allred Company based in San Diego. The Douglas Allred Company is the developer of the 180-acre Park Place Business Park, which is located at 1575 S. Price Road, just south of the Loop 202 in Chandler.

The project was launched with a very ambitious timeline of 18 months and Willmeng, Balmer Architectural Group and the more than 300 subcontractors who worked on the job delivered. The project is the latest example of how custom build-to-suit building construction like the Northrop Grumman facility are able to accelerate the building process, spur on more corporate relocations, increase jobs and drive economic development in areas throughout the Valley. Willmeng began work in 2017, executing tenant improvements on multiple buildings in Chandler for Northrop Grumman (formerly Orbital ATK). In 2018, Northrop Grumman acquired Orbital ATK, increasing the need for expansion in the Valley, and in 17 months, one of the largest office and manufacturing facilities in the Valley was completed.

“The facility is a reflection of the vision that the team at the Douglas Allred Company has to strategically create appealing and unique campus environments,” said Willmeng president and CEO James Murphy. “We were proud to take on the challenge of building this facility at a speed that is truly unparalleled in the market, achieving the unachievable to ensure there were no disruptions to the important work accomplished at Northrop Grumman. We were truly working to support a launch schedule.”

“When we started thinking about this facility, we had 1,000 less people, and we had won so many larger contracts that in production, we were maxed out,” said Terry Feehan, who served as the project manager for Northrop Grumman and is the Launch Vehicles Vice President. “We had a facility designed for a much smaller footprint of manufacturing, so we worked with the City of Chandler, with the state and came together with the ability to build this building and bring in many more people. We’ve been hiring about 300 people a year for the past three years and are on the path to hire 250 this year, but we had to slow down because we were building a new building.”

The Park Place development, once completed, will generate an annual economic impact of $1.4 billion, according to a report from Scottsdale-based Elliott D. Pollack & Company. It will create more than 2,000 construction jobs during build-up, and employ an estimated 9,691 when built out.

Feehan, who is a retired Air Force Major General, gave the media a look inside the “Great Hall,” which features unique amenities like a fully staffed cafeteria, dining areas, lounge areas, a game area with pool tables and foosball tables as well as an outdoor gathering area with a basketball court and other activity spaces. The office portion of the facility features abundant windows and natural light, giving team members a healthy work environment.